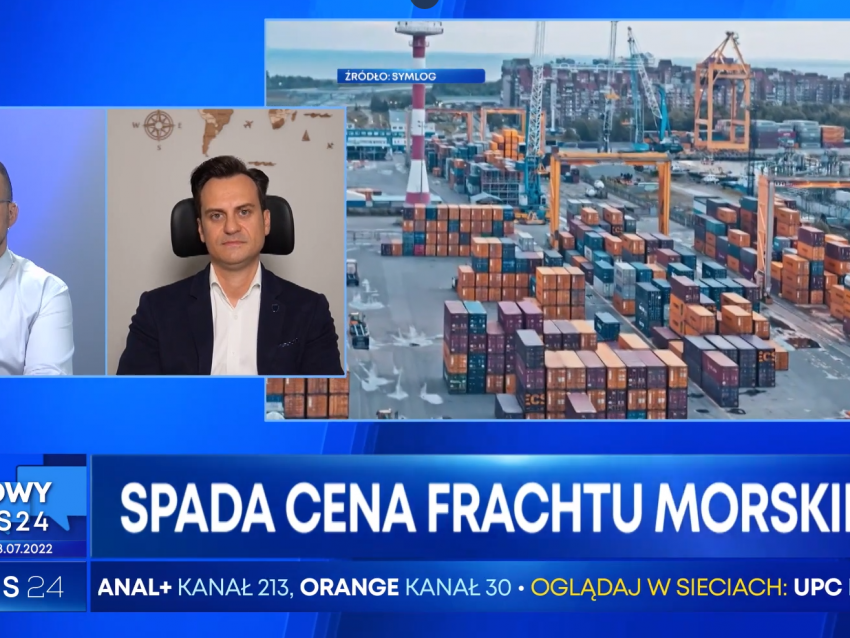 Bartosz Miszkiewicz, president of Symlog, talks about the importance of sea freight for logistics, the challenges we face in the coming months and the solutions at our disposal.

Biznes24 editor: It is no longer the contracts, but the logistics of coal deliveries that will be the biggest challenge for the domestic energy sector in the coming months, say market experts. National transport corridors are already crowded, it's high time to check the condition of Polish logistics, forwarding and transport. Bartosz Miszkiewicz, CEO of Symlog is with us, good morning.

R: From your point of view, do you already feel transport bottlenecks related to a sudden wave of energetic coal that came to us from across the seas and oceans?

BM: Not yet, because in fact it can be said that both coal and pellets, as well as some kind of energy materials, both go by sea and rail, or at least try to be these deliveries via these channels. We have a lot of inquiries from businessmen who want to make big money very quickly, to download large amounts of coal or other raw materials. However, there are no problems related to the wagons or just transport. This is quite a big problem for those people who want to enter the market and start an energy business at the moment. It's not that easy to start this way.

R: Well, and probably many people have found an opportunity to buy cheap energy somewhere far away and bring it to our country.

R: Where are these transport problems now the greatest, is it the railroad, is it a lack of carriages or are other places the Achilles' heel?

BM: Indeed, the market is so hot that the lack of wagons is noticeable on the market. When it comes to containers, there is no shortage of containers, there is even an oversupply. From what I read recently, there are six million containers produced during this pandemic period, which at this moment are, how to say - available in a pile, so they could be used at any time and are not used at all. There is no problem with that either. When it comes to the supply of space on ships, there is also no problem. Holidays are such a period of slowdown, therefore usually this July and August are calmer.

R: On January 28, a record was set when it comes to the price of sea freight, since then the cost of freight has dropped - at what level is it currently?

BM: At this point, when it comes to sea transport from China to Europe, the prices have indeed dropped and sea freight can be obtained for a forty-foot container in the region of 8-9 thousand dollars. It is a cheaper solution at the moment than rail freight because rail freight is around 9-12 thousand dollars. However, there is a large group of customers who are still very much interested in fast rail delivery, and yet the difference is twenty days vs. fifty-odd days is not significant to a large group of customers.

R: This railway transport that flows to Poland from China passes through a region which is, say, very sensitive to European politics - through Belarus. Are there any problems with transport, transit, and the smoothness of these deliveries?

BM: No, from the very beginning it can be said that from the outbreak of the war there was no problem. It must be remembered that all military operations are carried out, at this point, in the East of Ukraine. It is quite far from the main line as the main line runs near Moscow and then through Minsk and to the Terespol-Brest crossing. So it is quite far away and nothing is happening there.

R: And if someone now wanted to make purchases somewhere in the Far East and bring them to Poland, let's present two proposals - which is the cheapest and which is the fastest?

BM: Well, just to sort it out. Well, let's approach the situation on an ongoing basis, because the last three months have been a continuous fluctuation in supply, location, and price changes both at sea and on the railroad. Today, if we want to download the goods (let's talk about a forty-foot container), the transit time on the railroad is about 22-24 days. However, it is today because last month there was so much interest in shipping containers by rail that border crossings were blocked and many trains were canceled. Some of the containers that were ordered in June, even today, have not left some terminals because they are covered with new containers. It is a problem on the railroad, but it is already discharging at this point. And indeed, that is, these twenty-several days on the railroad at this point the price is around 9-12 thousand dollars. If we would like to get this product by sea, the transit time is around 55 days - but the price at the moment is attractive because it is about 8-9 thousand dollars. This makes sense for many clients, because the high dollar exchange rates mean that many clients have become quite expensive and are looking for cheaper solutions. But, I would like to add one more thing: general cargo is still cheaper on rail when it comes to groupage shipments.

R: General cargo is what size?

BM: These are pallets, you can say packages, pallets - from one to several, a dozen, because later we talk about such partial shipments, i.e. we take part of the container. These are shipments that count a bit differently than standard general cargo.

R: Then I will ask you about the great investment that was to be built in Małaszewicze, what the market says about this confusion with the construction of a huge terminal that was to receive transports from the East, but now, after various organizational changes, it is not known whether the money for this terminal will be. Is he needed and how is it assessed by the market?

BM: You know, I really like the Chinese proverb: "you want to be rich - build a road". And the Chinese have been implementing this idea for many years in the form of building a network of highways and high-speed trains. In my opinion, if we want to be an important player in this Sino-European puzzle, this terminal should appear, it is very much needed. And remember, this is the eastern wall, so we are also developing the entire eastern Poland, which will be really important in the years to come. In my opinion, this terminal should be created, I keep my fingers crossed for this to succeed.